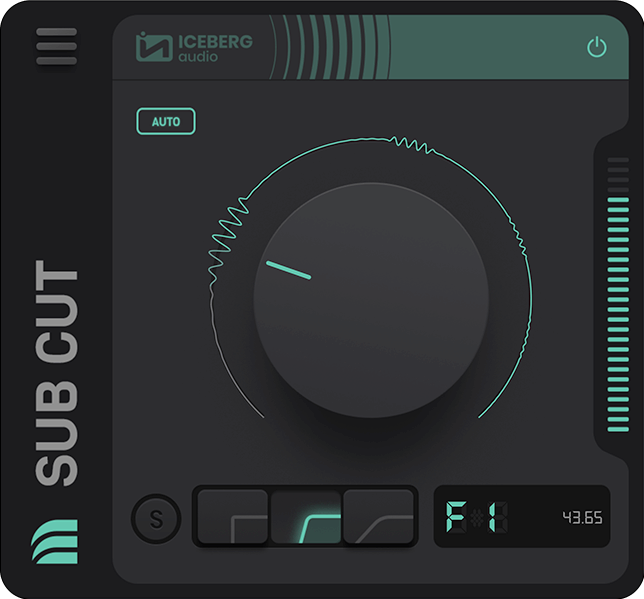 I've been asked a couple of times if Sub Cut is a linear phase filter. It is not and this might be surprising to some people so I'm going to outline our design decisions here.

But what does that actually mean for music producers? The truth is that in most daily music production activities it makes hardly any difference and most producers ignore it entirely. Most filters you use, or don't even realise you are using because they are in a channel strip or synth, are IIR filters with non-linear phase. But there are some cases whereby phase considerations are important - especially in areas of the spectrum whereby the combination of sound waves in a room either lead to an amplification or a cancellation of the sound giving unexpected results. This is most pronounced at low frequencies so its natural to ask what Sub Cut does with this since it operates in that area of the spectrum.

So to answer that lets first look at what we wanted Sub Cut to do.

We wanted Sub Cut to have a certain filter characteristic. This came from our work on Beatgrader whereby the underwater effect sound has a very steep filter cutoff, a sound that was modelled on the algorithms typically used in sinc interpolation resampling. We also liked it and felt a similar steep cutoff would sound good in a high pass filter used for layering subs.

We also wanted low latency, i.e. a plugin that doesn't introduce undue latency in DAWs. Yes there is latency compensation now, but that works around plugin latency by introducing extra delays to compensate. Latency is still latency, and the less the better!

For a low latency steep cutoff at low frequencies your transition band (i.e. the width between where you still have all the frequencies and the bit where they are reduced) is extremely narrow.

To give you an example of what this means in practice, say you were cutting in the sub range E2 (82.41Hz) and below and wanted to rolloff such that all frequencies C2 (65.41Hz) and below were heavily reduced. That difference is only 17Hz wide. If you experiment with various filter design tools you will quickly see that it's more difficult to create filters that behave the way you want at these frequencies.

Filter design is always a game of tradeoffs. We didn't want to compromise on latency, frequency response or the steep cutoff, so we decided a non-linear phase design was acceptable given everything else. It also sounded great!

But despite us liking the design and finding Sub Cut useful in our own productions (none of which ever suffered from a phase issues in practice), we still found ourselves somewhat jokingly returning to the linear phase question. I think underneath it all we were concerned with it having the word 'Sub' in the name of the plugin and the common perception that 'subs need linear phase'. However once we thought it through properly we were happy to break with that norm due to the particular use cases of Sub Cut.

Often phase issues at low frequencies are problems with phase differences in left and right channels. The two channels are playing the same frequency but are slightly out of phase and in a real room these waves cancel each other out leaving the sound feeling thin. This is why many people opt for a mono sub to get around this issue and why subs speakers are mono. (Although with much of the world listening in headphones now many producers just ignore the problem altogether!)

Linear phase does not correct left/right phasing issues. If Sub Cut does alter the phase it does so in left and right equally across the frequency band. So if your source material had a left/right phase issue before Sub Cut, it will have it afterwards also.

For years we've been looking at all the ways people alter low end, stock EQs in DAWs, plugins and hardware. We found that anything that doesn't specifically state that it is linear phase is most likely a non-linear phase design. We also looked at a few plugins that people perceive to be 'clean sounding' and found they were non-linear phase too.

And this makes sense because the vast majority of filters in plugins are some variant of a biquad IIR, or a cascade of biquads and these designs exhibit non-linear phase. These designs are popular because they are low latency, low CPU and the cutoff frequencies of these filters are relatively easy to manipulate in realtime for automation, etc. Non-linear phase is ok!, its not evil and it's used everywhere every day.

Then consider the operating frequency range of Sub Cut. It is much tighter and focused than normal EQs but is still covers more notes on the scale than you may think. Sub Cut cuts up to 220Hz which is the A below middle C. When in auto mode it pitch detects the fundamental and then cuts almost an octave above that frequency. So those very low frequencies with the potential left/right phase issues will actually be removed by Sub Cut, and if some phases get altered above 220Hz they are less likely to cause issues with the type of material typically being processed by the plugin.

So in our opinion, non-linear phase is perfectly fine for the very vast majority of cases and well worth the tradeoff.

Phase differences are one of the factors that give an EQ or filter a 'sound' and we are fine with Sub Cut being a filter with a 'sound'. We see it as a tool for the production process when layering various sounds together. We don't see it as a mastering tool where you are dealing with more finished material and want to make more subtle alterations.

Saying that we're not ruling out adding a linear phase option in the future if people really want that and can tolerate the trade-offs. That would be a different filter though. It would sound different and I'm not convinced would bring the benefits people expect. But we'll certainly keep it under consideration.